Duncan Brown and Peter Saulson, who co-lead the Syracuse University Gravitational Wave Group with Stefan Ballmer, were interviewed by Vox. The two discussed LIGO’s recent detection of gravitational waves from colliding neutron stars, and the wave of discovery that followed. “It’s one of the most complete stories of an astrophysical event that you could possibly imagine,” says Saulson. “I think the scientific impact of this discovery is actually going to be bigger than the first detection of black holes from gravitational waves; there is so much more physics and astronomy involved,” says Brown. Read more at vox.com.

The Daily Orange, Syracuse University’s student newspaper, has published an article about the Gravitational Wave Group as a follow-up to the recent award of the Nobel Prize to key LIGO scientists. Peter Saulson and Stefan Ballmer were interviewed for this piece. Read the article at dailyorange.com.

USCNews has published a story on Pegasus, a specialized computer program that helps LIGO deliver data securely and efficiently, featuring Ewa Deelman of the USC Information Sciences Intitute (ISI). Ewa and ISI are currently collaborating with the SU gravitational wave group on an NSF DIBBs grant. Read more at news.usc.edu.

Duncan Brown and Stefan Ballmer were interviewed by local NPR affiliate WRVO regarding the LIGO project’s recently awarded Nobel Prize in Physics. “We all invested our careers in this,” Ballmer said. “We know that it’s a new frontier in physics, peeling back the curtain of the unknown a little more for all of humanity.” Said Brown, “The information encoded in those gravitational waves tells us about the universe, how stars evolve, how they live, how they die. It’s not everyday that you get to be part of a whole new field of astronomy.” Read more at wrvo.org.

Peter Saulson, Duncan Brown, and Stefan Ballmer were interviewed by LocalSYR for the network’s news broadcast and web publication. The trio, who lead the Syracuse University Gravitational Wave Group, gave their perspective on SU’s role in the recently awarded Nobel Prize in Physics, and the future of LIGO research. “One thing that people don’t realize is that SU was the first university aside from MIT and Caltech to invest in this field, and they’ve ssupported it steadily all along,” said Saulson. Read more and see the video clip at localsyr.com. 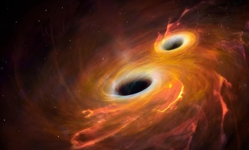 LIGO’s fourth detection of gravitational waves from a black-hole merger, which occurred on August 14th, was announced at a meeting of the G7 science ministers in Turin. This detection is the first to also have been picked up by the Virgo detector, located near Pisa, Italy. This third detector (in addition to Hanford, Washington and Livingston, Louisiana) allows astronomers to measure gravitational waves in three dimensions for the first time. Stefan Ballmer was quoted in an article at theguardian.com.

Six months after announcing their groundbreaking detection of gravitational waves from colliding black holes, Syracuse University professor of physics worked with two other colleagues from the Laser Interferometer Gravitational-Wave Observatory (LIGO) to coordinate a two-week workshop at the Kavli Institiute for Theoretical Physics (KITP) in Santa Barbara, California. Read more in Quanta Magazine.

An alumnus of the College of Arts and Sciences has been instrumental in the Laser Interferometer Gravitational-Wave Observatory (LIGO)’s third detection of gravitational waves, demonstrating that a new window onto astronomy is fully open.

Alex Nitz G’15, who earned a Ph.D. in physics, helped detect the signal on Jan. 4, 2017, using a software package he began developing at Syracuse. As was the case with LIGO’s first two detections, the wave in question came from the merger of two black holes, resulting in the formation of a single larger black hole.

“We are extremely proud of Alex for helping detect the furthest binary black hole merger that LIGO has seen. These black holes are over 2.8 billion light-years away,” says Duncan Brown, the Charles Brightman Professor of Physics at Syracuse.

The third detection of gravitational waves has been featured in Quanta Magazine. The article discusses questions about black hole pairs and the scenarios that lead to black hole mergers. Syracuse University professor Duncan Brown was interviewed for the article. Read more at QuantaMagazine.org.